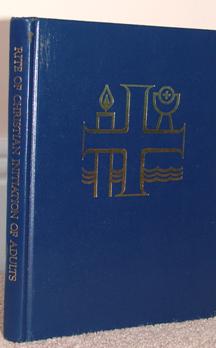 The Rite of Christian Initiation of Adults (RCIA)
– an introduction

When we want to celebrate a Marriage, we use the Ritual of the Celebration of Marriage. When someone has died, we look to the rites contained in the Order of Christian Funerals. When someone approaches us seeking to become a Catholic Christian we use the Rite of Christian Initiation of Adults (RCIA). It is the normative and only way in which the Church welcomes and initiates new disciples into Christ’s living Body.In 1974, the famous liturgist Aidan Kavanagh O.S.B. estimated that when historians look back at Vatican II and subsequent decades, they may well see the RCIA as one of the most important results of the Council. He felt this not just because of the changes to the initiating ritual per se, but because of its vision that the initiation of new Catholics is the responsibility of all parishioners (see the Rite itself, paragraphs #4 and #9). It challenges each parish to truly be salt for the earth and light for the world, a living sign of the saving embrace of God, welcoming, missionary, intimate with the Word of God, on a path of continual conversion, accompanying new members as they are apprenticed in Christian discipleship.
A Question: What kind of qualities would you hope your parish can offer to those seeking initiation into the Christian Community? What do you think the hallmarks should be?

What used happen in the decades before 1972?
The RCIA ritual was first published in 1972, and was translated and adopted by the Irish Episcopal Conference in 1986. Prior to that, adult baptism was often celebrated as a private event after several weeks instruction on the catechism. Sometimes it even took place in the sacristy. It had little or no impact on the parish. The Ritual used was the Rite of Infant Baptism, which meant that the adult did not even answer for their own faith commitment, rather the Godparents answered for them. Their 1st Communion was received on the following Sunday and the adult received Confirmation at a later date, often at next parish visit of the Bishop.The Council Fathers at Vatican II, moved particularly by the perceived inadequacy of the old ritual in missionary contexts, decreed that the catechumenate for adults, divided into several steps, should be restored and the rites of adult baptism should be revised [Sacrosanctum Concilium #64-66]. The word “restored” of course reminds us that the Church was not inventing anything new, but recovering a lost treasure.

Here are some examples of the RCIA from the early Church:
A document that was influential on the renewal of the liturgy after the Council is a multi-layered text known as ‘The Apostolic Constitutions’. It was written over a variety of times and contexts whose dates vary from the 2nd to the 4th century A.D. and gives us some insight into early Church liturgy.

According to this text those seeking Christian initiation were questioned about their reason for coming. They were asked about their state of life and work as some professions were incompatible with the Christian life. These inquirers continued “to hear the Word for 3 years”. They met every day for prayer and instruction, with lay or clerical catechists, who laid their hands on them at the end of their meeting.

Those who were ready to be initiated through receiving Baptism, Confirmation, Eucharist at the Easter Vigil first had their life examined. Had they lived good lives as catechumens? Had they honoured the widows? Has they visited the sick? Had they done every kind of good work? Those who brought them to the Church bore witness to them. They then began an intense period of spiritual preparation in Lent for their initiation at the solemn Easter Vigil and the whole Christian community joined with them in this period of prayer, fasting and acts of charity. After their initiation, the newly baptised (or neophytes) had a period of reflecting and entering deeply into the sacred mysteries they received during Eastertide.

We can see another example of Christian initiation in the life of St Augustine. Born in 354, he was not baptized as a child but was enrolled as a Catechumen by his mother (none other than St. Monica of course) as a boy. Then came his “wilderness years” and his movement to baptism was slow. It was during his time in Milan that he came under the influence of his bishop, St Ambrose, to whom he wrote in 386 petitioning for baptism. He was baptized a year later moving on to priesthood and becoming Bishop of Hippo in 395.

In around the year 400 A.D. a Deacon by the name of Deogratias wrote to Augustine asking advice about how to catechize the uninitiated. Augustine gave an encouraging and lengthly reply. His advice to the deacon in how to welcome inquirers included finding out “what their disposition of heart might be”. Using their reply as a starting point, they were to be lead through the history of salvation through Scripture. Love was his pre-eminent teaching principle guiding everything. Augustine used the image of the Church being like a mother hen gathering chicks under her wings.

The restored Rite of Christian Initiation of Adults the Church now uses, which draws heavily from the ancient practice of the Church, has four distinct PERIODs of time separated by three STEPS, thresholds which are celebrated by major ritual celebrations.

RCIA: the structure (– see page 14 of the RCIA Ritual book)

In order to understand this whole spiritual journey which those who are seeking to become Catholic Christians undertake perhaps we can make an analogy between RCIA and the process which people follow towards the celebration of Marriage.

The path to married life involves the some first attractions, some draw between the man and the woman. There are some exploratory ‘dates’, a time of ‘getting to know you’. After a mutual decision, then follows a time of ‘going steady’, gradually growing in knowledge and love, the big decision of getting engaged, the planning and intense preparations for the Wedding day and the living out of married life.

The Pre-Catechumenate
• The Aim: an initial stirring of faith and hunger for God
• Through: informal listening, sharing of life stories
• Who: the candidate(s) with a small parish group, priest, sponsors, parish catechist
• Time: indefinite – it takes as long as it takes, according to the requirements of the person presenting themselves. It’s a discernment process – remember how long it took St. Augustine!
• Leading to: The Rite of Acceptance, celebrated in your parish.

The Catechumenate:
• The Aim: the Conversion of mind and heart
• Through: An APPRENTICESHIP in the Christian Life
• Who: the same parish group and the whole parish community.
• Time: 1,2, maybe 3 years?
• Leading to: The Rite of Election on the First Sunday of Lent, celebrated with the bishop in the Pro-Cathedral.All during these months and years, catechumens feed on the Word of God. As the Lord said: “My mother and my brothers are those who hear the word of God and put it into practice” Luke 8:21. Thus the Sunday Lectionary is the essential text, as the liturgy of the Church puts before us a rich diet of scriptural texts (over 80% of the entire Bible over the 3 year cycle) through which we come to know God. As Pope Benedict XVI said at the Synod of Bishops in Rome on October 5th 2008: “Only the Word of God can change the depths of mans heart, and so it is important that with it both individual believers and the community enter into an ever-growing intimacy.”

The catechumens attend Sunday Mass until the end of the Liturgy of the Word, when after the Homily they are kindly sent with a blessing to feed on the Word by a form of contemplative reading [‘Lectio Divina’ ] with their sponsors and/or parish catechist. Their spiritual path thus follows the liturgical year and questions about our faith arising from this cycle can be supplemented with explorations of the Catechism of the Catholic Church.

At the Rite of Election, the catechumens are presented to the Diocesan Bishop by their godparents, whom they have chosen beforehand. (Sponsors are chosen by the parish to accompany and support them till this point. But Godparents are to journey with them for the remainder of their lives and so are chosen by the catechumens themselves). From this day forward they are no longer called catechumens, but the elect, having written their names in the diocesan Book of the Elect.

Then they enter:
the Period of Purification and Enlightenment [Lent] • The Aim: To uncover what needs to be healed and strengthened
• Through: prayer, acts of charity, fasting
Celebration of the Scrutinies at Sunday Mass (3rd, 4th, 5th Sundays)
Presentation of the Creed and the Our Father (midweeks)
• Time: Lent
• Leading to: the Sacraments of Initiation of Baptism, Confirmation and Eucharist at the Easter VigilMystagogy – entering the mysteries received…
• Aim: living out our immersion into the Paschal Mystery
• Through: Reflection on the Sunday Eucharist at which, of course, they now fully participate.
• Who: the ‘neophyte’ (newly initiated) and the whole parish community – with help from godparents
• Time: the Easter Season and a lifetime…

All of the above is a lot of information to take in. But a good question to ask at this point is: What kind of message does the RCIA process give about our Church?

It’s about formation of disciples not just information – it is about the extended, gradual conversion process that incorporates them into a living, praying, loving Body, that is our parish Church community. Welcoming new Catholic Christians is a public and community event. The path to life which they undertake is God’s work and cannot be ‘programmed’ or forced to fit into a time-frame (remember all the parables of Jesus about the kingdom of God and discipleship being about a growing, organic thing). It takes as long as it takes and each person to be welcomed is the starting point.

Hospitality and companionship are hallmarks of this process. The Sunday Lectionary is the heart of our catechesis and the catechumens are ‘apprentices’ not students. The ‘pillars’ of this spiritual journey are
Prayer, the Liturgy, Catechesis and Acts of Charity, all in the lived ecclesial context of your parish community.

Often those who have accompanied those seeking to be initiated have their own lives transformed. Many times, I have heard them say: “I have received so much from this, much more than I feel I have been able to offer at all.” Parish communities are challenged to explore and explain their faith to those wanting to join our Church, making conscious choices to receive the sacraments.

In the RCIA process, there may be an ‘antidote’ to the worst of our ‘conveyor belt’ sacramental programmes of the past. Every parish should have several copies of this ritual and imitate its model of evangelisation.

For those interested in exploring the path of the RCIA, a 5 day experiential and formative conference “Becoming the Body of Christ” has been organised to take place in All Hallows College, Gracepark Road, Drumcondra, from Sunday 28th June to Friday 3rd July 2009. Further information will be available here soon.

FORMS relevant to the RCIA process can be found in our DOWNLOADS section:
http://litmus.dublindiocese.ie/downloads.php